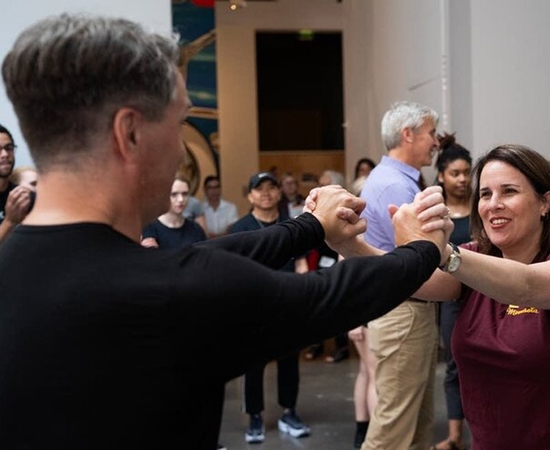 Professional captioning provided
This event will be recorded

Bodystorming is a tool created by Carl Flink of Black Label Movement and David Odde’s biomedical engineering lab in their ongoing decades-long collaboration. Bodystorming reframes how humans interact with scientific concepts, promoting deep participation from patients, caregivers, and clinicians, bringing humanity and caring into the process, and including voices not typically heard in this type of research. Using choreographic techniques, Bodystorming provides scientists with a highly flexible modeling system to inform their research and complement more traditional software-based models. It also creates a fertile landscape for inspiring movement and choreographic concepts. This event will include a Bodystorming practice, in which participants can participate in person or online, as well as conversation about the process and time for questions.

The Institute for Advanced Study is committed to making its events accessible to everyone. All Spotlight Series events are professionally captioned. Some accommodation requests may take us time to arrange, so please make requests for this event by Tuesday, January 31, 2023. If you are registering after this date, please reach out to us so we can explore available options. Questions/requests, contact Abby Travis, [email protected]

Carl Flink is Artistic Director of the dance company Black Label Movement (Minneapolis, MN) and the University of Minnesota’s Director of Dance. He was a member of the Limón Dance Company during much of the 1990s and performed Paul Taylor's historic minimalist solo Epic for a retrospective concert on post-modern minimalism presented by Lincoln Center, NYC, NY in 1992. His commissions and invited presentations include the American Dance Festival (Durham, NC), Bates Dance Festival (Lewiston, ME), The Minnesota Orchestra, MADCO (St. Louis, MO), University of Florida Performing Arts (Gainesville, FL), Same Planet Different World (Chicago, IL) and Urbanity Dance (Boston, MA), and multiple TED talks. He is a two-time McKnight Choreography Fellow and the 2020 UMN CLA Dean’s Medalist. Carl holds a J.D. from Stanford Law School.

David Odde is the Bakken Professor for Engineering in Medicine at the University of Minnesota. Dr. Odde’s group builds computer models of cellular and molecular self-assembly and force-generation-dissipation dynamics, and tests the models experimentally using digital microscopic imaging of living cells ex vivo and in engineered microenvironments. His group seeks to bring an engineering approach that uses physics-based modeling and analysis to understand, predict, and control disease outcomes. As part of his modeling practice, Dr. Odde’s lab group collaborates with Black Label Movement to develop human movement as an approach to simulating cellular and molecular processes underlying cancer progression.

Michael Corey is the Geospatial, Technical, and Data Lead / Associate Director for Mapping Prejudice. Michael is in charge of developing and maintaining Mapping Prejudice’s technical workflows, which use crowdsourcing to identify racially restrictive housing covenants on properties in Minnesota and beyond. Before transitioning to public history, Michael spent 20 years as a journalist and data journalist at the Star Tribune, Reveal from the Center for Investigative Reporting, and the Des Moines Register. His journalism spanned zoning and segregation, mortgage disparities, the U.S.-Mexico border fence system, human-induced earthquakes, and sexual abuse in the Catholic Church. He is also a graduate student in the University of Minnesota’s Heritage Studies and Public History program.

About the Spotlight Series

The University of Minnesota Spotlight Series is a collaborative partnership between the Institute for Advanced Study, Northrop, and University Honors Program to present lectures, panel discussions, exhibits, and other events throughout the academic year around timely topics of interest. The six-part 2022-23 series will focus on how data—their collection, analysis, and the research questions that rely on them—connect to the deeply personal lived experiences of individual human beings and to the human condition at large. Events are Thursdays 3:30-5:00 pm CT and may be attended in Northrop’s Best Buy Theater or online via Zoom. Q&A sessions will follow each event.