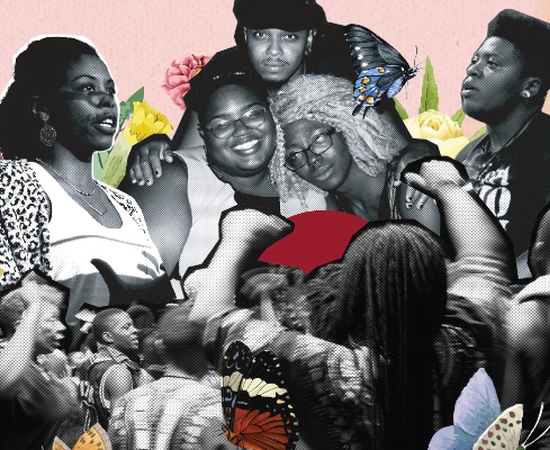 What does it mean to be a world builder?

Barack Obama famously said that the purpose of social movements is to get a seat at the table. However, as Deva R. Woodly argues in her new book, Reckoning: Black Lives Matter and the Democratic Necessity of Social Movements—a sweeping account of the meaning and purpose of the Movement for Black Lives (M4BL)—the value of such movements is something much more profound: they are necessary for the health and survival of democracy.

Woodly will begin by sharing how a unique political philosophy—Radical Black Feminist Pragmatism—served as an intellectual foundation of the movement and the role it played in transforming public meanings, public opinion, and policy. The conversation will then turn to speculating on what a 21st-century paradigm that centers the politics of care might include. We will discuss how political horizons are constructed in popular discourse and political action; the structural relations of race, coloniality, and indigeneity and what it would take to change those relations; abolition democracy; the politics of gender; disability justice; and the political economy of degrowth. Together, we will ask: what ideas shape the politics of the future, and what consequences and possibilities are implied by their pursuit?

CART captioning provided
This event will be recorded

Deva R. Woodly is an Associate Professor of Politics at the New School. A former fellow of the Institute for Advanced Study (2012-2013), she is the author of Reckoning: Black Lives Matter and the Democratic Necessity of Social Movements (Oxford 2021) and The Politics of Common Sense: How Social Movements Use Public Discourse to Change Politics and Win Acceptance (Oxford 2015). Her research covers a variety of topics, from media & communication, to social movements, race and imagination, and political understandings of economics. In each case, she focuses on the impacts of public discourse on the political understandings of social and economic issues as well as how those common understandings change democratic practice and public policy. Her process of inquiry is inductive, moving from concrete, real-world conditions to the conceptual implications of those realities. In all cases, she centers the perspective of ordinary citizens and political challengers with an eye toward how the demos impacts political action and shapes political possibilities.

Sun Yung Shin was born in Seoul, Korea and was raised in the Chicago area. She is a poet, writer, and cultural worker. Shin is the author of the poetry collections The Wet Hex (2022); Unbearable Splendor (finalist for the 2017 PEN USA Literary Award for Poetry, winner of the 2016 Minnesota Book Award for poetry); Rough, and Savage; and Skirt Full of Black (winner of the 2007 Asian American Literary Award for poetry). She is co-editor of Outsiders Within: Writing on Transracial Adoption, and author of bilingual illustrated book for children Cooper’s Lesson. She is the editor of What We Hunger For: Refugee and Immigrant Stories on Food and Family (2021) and of A Good Time for the Truth: Race in Minnesota. She lives in Minneapolis where she co-directs the community organization Poetry Asylum with poet Su Hwang.

Reckoning: Black Lives Matter and the Democratic Necessity of Social Movements, by Deva Woodly (Oxford University Press) is an analysis of the emergence of the Movement for Black Lives (M4BL), its organizational structure and culture, and its strategies and tactics, while also laying out and contextualizing the social movement’s unique political philosophy, radical Black feminist pragmatism (RBFM), along with documenting measurable political effects in terms of changing public meanings, public opinion, and policy. Throughout the text, the author interweaves theoretical and empirical observations, rendering both an illustration of this movement and an analysis of the work social movements do in democracy.

The Wet Hex, by Sun Yung Shin (Coffee House Press): Sun Yung Shin calls her readers into the unknown now-future of the human species, an underworld museum of births, deaths, evolutions, and extinctions.

A Good Time for the Truth: Race in Minnesota, edited by Sun Yung Shin (Minnesota Historical Society Press): Sixteen of Minnesota’s best writers provide a range of perspectives on what it is like to live as a person of color in Minnesota. They give readers a splendid gift: the gift of touching another human being’s inner reality, behind masks and veils and politeness. They bring us generously into experiences that we must understand if we are to come together in real relationships.

IAS Thursdays at the Institute for Advanced Study brings a wide range of ideas, conversations, and viewpoints to the heart of the University of Minnesota. Our events are free and open to the public; IAS Thursdays are designed for scholars from all walks of life.