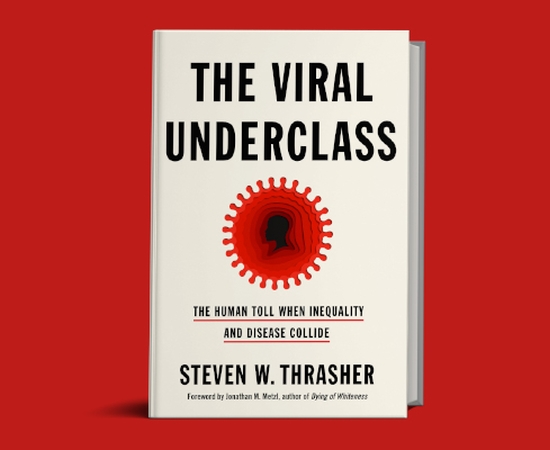 Why do the same groups of people continuously become infected by and die from viruses, even very different viruses? Drawing on his new book The Viral Underclass: The Human Toll When Inequality and Disease Collide and upon a decade of research on HIV/AIDS, Covid-19 and monkeypox, Northwestern University professor Steven W. Thrasher shows how social structures—such as racism, ableism and homophobia—are the drivers of epidemics. As his methods include journalism, medical anthropology, memoir, critical theory, virology, film studies and epidemiology, Dr. Thrasher will illustrate how an American Studies approach is helpful to understand overlapping pandemics, as well as useful in imagining different futures.

Book Signing and Sales
A book signing will follow this event at 5:00 p.m. CT. Book sales provided courtesy of the University of Minnesota Bookstore. For those attending virtually, books may be purchased online instead.

Steven W. Thrasher, Ph.D. holds the inaugural Daniel H. Renberg chair at Northwestern University’s Medill School, the first journalism professorship in the world created to focus on LGBTQ+ research. He is also a faculty member of Northwestern’s Institute for Sexual and Gender Minority Health and Wellbeing. His writing has been widely published by Scientific American, The New York Times, Nation, The Atlantic, The Journal of American History, BuzzFeed News, Esquire, Guardian, Village Voice and New York magazine. In 2019, Out magazine named him one of the 100 most influential and impactful people of the year and in 2020, the Ford Foundation awarded him a grant for Creativity and Free Expression. An alumnus of media jobs with Saturday Night Live, the HBO film the Laramie Project and the NPR StoryCorps project, he holds a PhD in American Studies from New York University. The Viral Underclass, his first book, has received starred reviews from Kirkus Reviews, Publishers Weekly and Booklist, and has been named one the Best Nonfiction Books of August by Amazon, one of the Best Books of August by Apple,  one of Five Must Read New Books by USA Today, one of the Best New LGBTQ Books of the Year by Shondaland, and one of the 10 Best Politics Books of the Fall by Publishers Weekly.  Twitter: @thrasherxy.

IAS Thursdays at the Institute for Advanced Study brings a wide range of ideas, conversations, and viewpoints to the heart of the University of Minnesota. Our events are free and open the public; IAS Thursdays are designed for scholars from all walks of life. A special thank you to our partner, the University of Minnesota Bookstores, for providing book sales at this event.