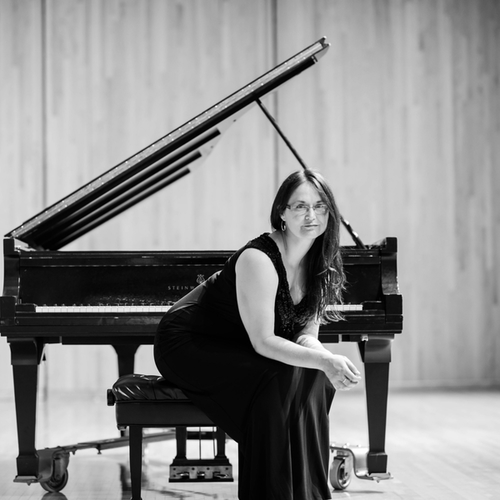 Ann DuHamel is an associate professor of Music in the Humanities Division at the University of Minnesota at Morris. She joins the IAS as a residential faculty fellow for Fall 2021.

Ann is at work on a project titled “Prayers for a Feverish Planet: A Musical Exploration of Climate Change,” which unites music and climate change in an attempt to expand and revolutionize the contemporary piano recital. The various performance pieces are written in response to different facets of the climate crisis, and performances will include discussion of the scientific and and cultural context, as well as additional multi-media components, with space for conversation with audience members. During her time at the IAS, Ann DuHamel plans to work with experts, writers, and artists across all subject areas to help develop, perform, and present the series.

Read on to learn more about Ann’s work in progress!

IAS: Your project combines new music with conversations around the most pressing issue of our time: climate change. Tell us more about how you’re doing this. How does the music itself address climate change? When you can be performing these pieces and including conversations, how do you plan to, as you say, “revolutionize the contemporary piano recital”?

You also mentioned a wonderful undertaking of collecting other pieces that also address climate change—at one point soliciting recommendations from others and receiving well over 100! What are some of your favorites? Can you share them with us?

Ann DuHamel: Thanks for the thoughtful questions, Abby! I’m going to combine the answers for these first two. When I first was grabbed by this idea, I was feeling really despondent about climate change (this was the end of 2019)—it seemed that every day there was a new headline about some catastrophic thing directly attributed to it—the loss of billions of birds, fires that are worse every year, horrendous floods, glaciers melting, the list goes on. I wanted to use music in some way, but I only really knew of one piano work that was somehow related to climate change (Whitney George’s Extinction Series). At the beginning of 2020 I opened a “Call for Scores”—listing it in a few places, trying to get the word out to composers that I was interested in pieces they had (or that they might even write for me) about this topic. The response was pretty phenomenal—composers from all over the world sent me their works. In total I received more than 170 pieces; some pieces are multi-movement, and if I count each individual movement, the number jumps to 316 movements.

These pieces are really amazing, covering a wide variety of topics about climate change—pieces about trees, about bees, about vanishing islands due to rising sea levels, about carbon in the atmosphere, about heat islands, and that’s just a sampling. My project is named “Prayers for a Feverish Planet” and there are quite a few works with a spiritual quality to them—several, for instance, use the hymn “For the Beauty of the Earth,” but approach the original musical material in different ways. I like so many of the works sent to me that I’ve chosen to learn about 60 (ambitious and, yes, crazy). There may be others I learn in the future.

I hope [my work] will spur them to take some action—maybe rethinking things in their daily lives, or planting trees, or driving less, or voting for people who can influence and create bigger systemic changes.

A traditional piano recital is about an hour of music, maybe 45–50 minutes if it features all contemporary pieces. Usually there’s not much speaking—just go out and play, and the audience listens. I’ve got about six hours of music here; my eventual goal is to have a series of six to seven programs where I play some of the works on each concert, and I invite speakers to talk about the issues brought up and referred to in the pieces. I also envision visuals projected onto a screen, if one’s available, to help make the points—these will vary depending on the piece—pictures, poetry, video clips. By “revolutionizing” what I mean and what I hope to achieve is bringing in other disciplines to the process in order to create a more powerful all around experience for the audience. This, in turn, I hope will spur them to take some action—maybe rethinking things in their daily lives, or planting trees, or driving less, or voting for people who can influence and create bigger systemic changes.

With so many pieces, there is a lot of flexibility here—I can extract them for a single hour-long recital, or create groups of recitals based loosely around some of the themes that have presented themselves. I’m currently planning to take the whole series out for the first time in April on the Morris campus, the weekend of Earth Day, spread out over four days.

Some of my favorites . . . how to choose?! I’ll play some of them on Thursday during my IAS fellows presentation. Two that I really loved from my initial listen are “Forgive them not, for they know what they do,” by Australian composer Karen Lemon, and “Those Who Watch,” by Gunter Gaupp, which is for piano and electronics. Lemon’s piece caught my ear because the opening section is quite hypnotic and trancelike before it devolves into chaos and finally mourning; the more I study and practice it, the more I really admire it because it’s such a well-crafted piece. Gaupp’s piece uses clips of news broadcasters and climate deniers spouting misinformation, while the piano grooves above it in an ever-more anxious way. I also love “Stop Deforestation!” by Dario Duarte, from Argentina—it’s quite beautiful, and it sort of reminds me of Radiohead’s music.  This list will surely change over the next few months. Other pieces I’m not playing on Thursday but might be considered current favorites are “Solipsismo” by Erick Tapia (Mexico), “Jacaranda” which is the second movement of “Trees of India” by Chris Williams (UK), “White Parasol” by Ian Dicke (US), and “Perforation” by Alex Burtzos (US).

IAS: Just last week, you spent two days with Northrop’s grand piano recording on the Carlson Family Stage. Tell us about that experience—what were you recording? And what was it like to record on that stage?

AD: Since the IAS presentation won’t be in person, and since Zoom is not particularly optimized for live music, I was recording the pieces I want to share on Thursday—the Duarte, Gaupp, and Lemon, as well as pieces by Vanessa Cornett (who teaches at the U of St Thomas a mile down the road), Stephen F. Lilly, and Daniel Blinkhorn (another Australian). I can use the clips in my slide presentation, and the sound quality will be better. Recording sounds glamorous but I find it can be a very tiring process—you have to be really focused for long stretches of time. I find it even more challenging when the pieces are near the beginning of the learning process (where I am now) as opposed to after they’ve lived in your fingers and ears for a year or longer. One great thing is that, at least for some of the takes, the Zoom audience may feel more like they are there in Northrop, which is such a beautiful hall. ♦

After launching her call for scores requesting music about climate change, Ann DuHamel received an overwhelming response: composers in more than thirty-five countries sent her more than 170 pieces. Factoring in multi-movement works and larger sets, she has since counted 316 individual movements/pieces.

Visit Ann DuHamel’s project website for Prayers for a Feverish Planet to explore a sampling of these submitted songs, with links to composer websites (as available), and program notes.

Ann has performed and presented in 16 countries on 4 continents, including Sala Verdi in Milan, Italy; the Sibelius Academy in Helsinki, Finland; and Trinity College in Oxford, England. In demand as a collaborative pianist, Ann’s performed chamber music with members of the Minnesota Orchestra and the St. Paul Chamber Orchestra, as well as with Martha Councell-Vargas, flute; Preston Duncan, saxophone; and Clara Osowski, mezzo-soprano. Her performance at Carnegie Weill Recital Hall with ensemble: Périphérie was lauded by the New York Concert Review as “outstanding,” praising the group of “superb musicians” who “played with power and assurance.”

Ann’s latest project, “Prayers for a Feverish Planet,” features 60 new works for piano and piano/electronics about climate change. Ann is Associate Professor of Music at the University of Minnesota Morris, and serves as Immediate Past President of Minnesota Music Teachers Association. She earned the Doctorate of Musical Arts degree at the University of Iowa under the tutelage of Ksenia Nosikova.