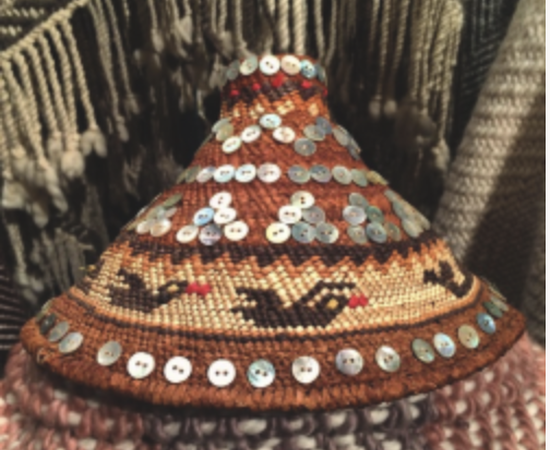 There exists a romanticized tendency to associate Indigeneity with land stewardship and the natural environment. As “back to the land” movements and New Age practitioners demonstrate, women are heavily implicated in this land-based narrative: Earth Mother and Mother Nature imagery is prevalent, as is the association of women with horticulture or herbalism. In the Pacific Northwest, where masculinity is often associated with water and the luscious, rugged evergreen landscape, these problematic gendered and geographic tropes maintain an even stronger hold. The region’s mountains and waterways are linked to male European exploration, adventure, and conquest, harkening back to the likes of Captain George Vancouver and James Cook. Perhaps reflecting the influence of settler colonialism on local tribal nations, similar nautical themes are emphasized in nearby Indigenous settings. Native patriarchs are featured in heroic accounts of whale hunts, whereas navigating raucous waterways in cedar canoes is often deemed suitable for only the bravest of men, and oral histories celebrate male protagonists who tamed legendary sea creatures. Questioning these binaries, this presentation examines the historical ways in which Coast Salish women–whose homelands encompass western Washington–interacted with, navigated, and prescribed meaning to water in artistic settings. Women propagated grasses in alpine lakes and rivers for use in basket weaving, bred now-extinct dogs on small islands to use their valuable fur for spinning wool, and even revisited tsunami sites to collect clay. These activities necessitated the mastery of canoes and the careful study of water. Contrary to popular thought, women were not confined to domestic spheres, and instead were highly mobile, sea-faring individuals engaged in trade and travel. I demonstrate how women participated in what is often characterized as the male arena, as well as how “feminine” artistic activities required advanced scientific knowledge of water passed down through one’s female lineage.