EVENT SUSPENDED | Human in the Data 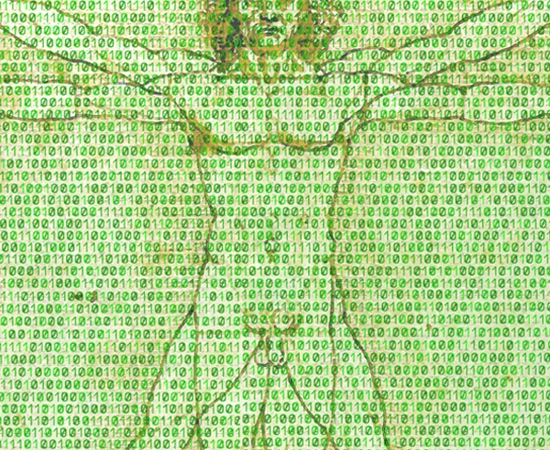 Sneha Narayan is assistant professor of Computer Science at Carleton College. Before her current appointment, Narayan worked on a PhD in the Technology and Social Behavior program at Northwestern University. Her research is focused on understanding how technical systems foster participation and collaboration in decentralized volunteer communities such as Wikipedia and fan wikis. Shilad Sen is a professor in the Department of Online Mathematics, Statistics, and Computer Science at Macalaster College. Sen studies member-maintained websites that empower Internet users to contribute information, such as photographs on flickr and articles on Wikipedia. He focuses on tagging systems, recommender systems, and combinations of the two.

This week, we would have brought you the next event in our recurring series, The Human in the Data, featuring Sneha Narayan and Shilad Sen. Although we’ve postponed this event for a future semester, now still seems a poignant time to consider the work of The Human in the Data at large, and to revisit a few conversations we’ve hosted through the series. At a time when our daily lives are inundated by conversations about flattening the curve, here are a range of talks on the ubiquity of Big Data and algorithmic decision making in every major sector in our world, including health, food, energy, education, environment, and social policy.

Borders often do not have much to do with the physical world. The edges of voting districts, cities, counties, states, and countries are decided by human processes, always implicitly if not explicitly political. Data are often provided pre­aggregated at a particular spatial polygon level. For example, data on poverty is collected at the block­group level, while data on education is easiest to obtain for school districts. This makes it difficult to combine data, and can lead to problems when data does not make sense at the level it was collected. In this talk, Amelia McNamara, University of St. Thomas Assistant Professor in the Department of Computer & Information Sciences, discusses issues related to spatial polygon choices, like gerrymandering and the Modifiable Areal Unit Problem.

Machine learning models are becoming increasingly opaque to human examination, even to their designers. Yet these models are also increasingly used to make high-stakes decisions; who goes to jail, what neighborhoods police deploy to, and who should be hired for a job. But how can we practically achieve accountability and transparency in the face of increasingly complex models? And how do we know if the algorithmic decisions are fair or discriminatory - what does it mean for an algorithm to be fair? In this talk, we’ll discuss recent work from the new and growing field of Fairness, Accountability, and Transparency in machine learning. We will examine societal notions of fairness and non-discrimination and explain how these notions have been defined using a mathematical framework. We’ll also discuss recently developed strategies for auditing black-box models when given access to their inputs and outputs and for white-box interpretability in decision-making.

Whether studying, designing or using algorithms, researchers need to understand how their questions intersect with the logics of automation and scale underpinning networked, computational platforms. In this lecture, VJ Um Amel presents a hybrid approach to analyzing various procedural algorithms, their relationship with their structured data (for example, tweets), and their impact on an Arabic-speaking virtual body politic. This investigation theorizes mediations of Middle Eastern activism, revolution, and migration. It begins by working through the challenges in producing knowledge that is analytically rigorous, durable, and is independent from various power centers and policy circles, securitized and militarized — and then exploring the emergence of new modes of knowledge production in an era of virtual reality, artificial intelligence, and large-scale violence.

The Real Promise of AI: How to Get AI-Human Collaboration to Work
Ece Kamar
Adaptive Systems and Interation Group, Microsoft

While many celebrated efforts in Artificial Intelligence aim at exceeding human performance, the real promise of AI in real-world domains, such as healthcare and law, hinges on developing systems that can successfully support human experts. In this talk, I'll share several directions of research we are pursuing towards effective human-AI partnership in the open world, including combining the complementary strengths of human and machine reasoning, addressing concerns around trust, transparency and reliability, and using AI to improve human engagement.

Where is the Human in the Data?
Graduate Students ask 10 Questions for Critical Data Studies

Inclusiveness in smartphone apps, gender transition and financial surveillance of identity, workplace surveillance among the world’s top retailers . . . This workshop served as the launching point for a critical data science study project that was jointly sponsored by the University of Minnesota Informatics Institute and the Institute for Advanced Study. The workshop included lightning talks by graduate students, table discussions, and developing “10 Questions for Critical Data Studies.”