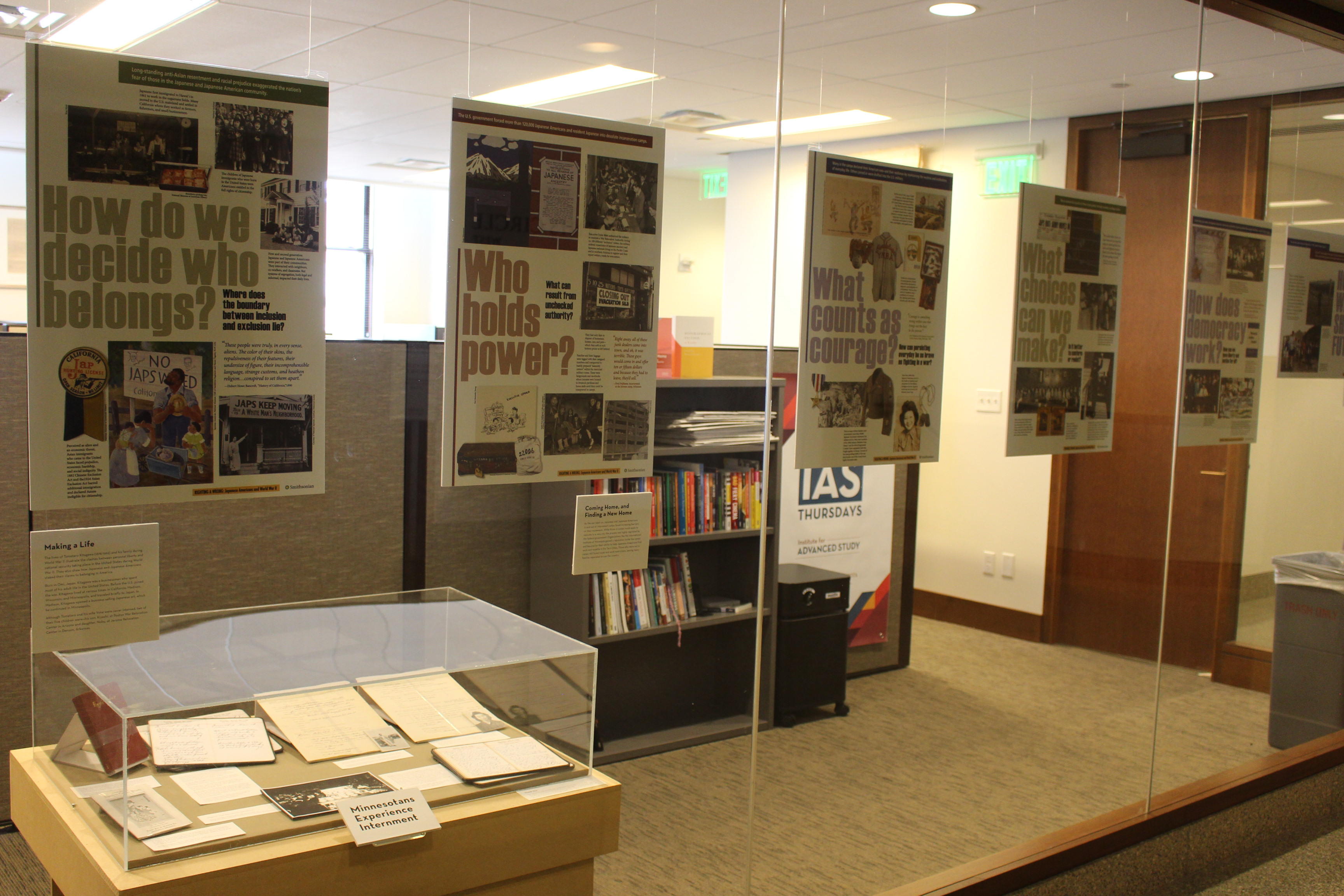 Righting a Wrong traces the story of Japanese national and Japanese American incarceration during World War II and the people who survived it. Young and old lived crowded together in hastily built camps, endured poor living conditions, and were under the constant watch of military guards for two and a half years. Meanwhile, brave Japanese American men risked their lives fighting for the United States. Some 40 years later, members of the Japanese American community led the nation to confront the wrong it had done—and urged Congress to make it right. Based on an original exhibition at the National Museum of American History, the Righting a Wrong centers around eight core questions that encourage viewers to engage in a dialogue about how this happened and could it happen again. Embracing themes that are as relevant today as they were 75 years ago, the poster exhibition brings forth themes of identity, immigration, prejudice, civil rights, courage, and what it means to be an American. Additional archival documents from the Immigration History Research Center Archives illustrate connections to Minnesota history.

The exhibit is copresented by the Institute for Advanced Study, Heritage Studies and Public History program, and the Immigration History Research Center Archives. Posters courtesy of the Smithsonian Institution Traveling Exhibition Service. Additional exhibit materials curated by HSPH student Jacob Noble. It will be on display in Northrop Suite 290 through Summer 2020.

On January 14-15, 1969, approximately 70 Black students from the University of Minnesota took over Morrill Hall, the administration building housing the Office of the President. The event lasted 24 hours—changing the history of the University and resulting in the founding of an African American Studies department. Fifty years later, a new exhibit titled Takeover: Morrill Hall, 1969 will open in Northrop's fourth-floor gallery to tell the story of the events. Archival documents, photographs, and recordings—some publicly exhibited for the first time—depict the power of student protest. The exhibit is copresented by Northrop, the Heritage Studies and Public History program, the Institute for Advanced Study, and the University Honors Program. It is presented as part of the 1968-1969: Historic Upheavals, Enduring Aftershocks lecture and event series; please join us for an opening reception in the gallery on February 6th.

Fifty years ago Americans questioned the balance of recreation and development along national waterways. Decades of pollution, diversion, and construction threatened the health of America’s rivers. Outdoor enthusiasts pressed Congress into action, creating the Wild and Scenic Rivers Act, signed by President Lyndon B. Johnson in 1968. Minnesotans took the lead, motivated by a desire to preserve the St. Croix River. Senator Walter Mondale and Representative Joe Karth collaborated with Wisconsin senator and founder of Earth Day, Gaylord Nelson, to craft the legislation and ensure its passage. The Wild and Scenic Rivers went up initially as part of the IAS's work around the theme 1968-69: Historic Upheavals, Enduring Aftershocks.

Highlighting the work of 100 artists, the Queer Forms exhibition and related programming sought to investigate and celebrate the history, politics, and culture of GLBTQ Liberation. Seen here are a few selected examples of works on display. Comprising a broad range of artistic forms and perspectives, Queer Forms coincides with the anniversaries of important markers in GLBTQ histories. These include the 50th anniversary of the establishment of F.R.E.E. (Fight Repression of Erotic Expression), the first gay student organization officially recognized by the University of Minnesota; the Stonewall Rebellion in New York in 1969; and the 60th Anniversary of GLBTQ resistance to police harassment at Cooper Do-nuts in Los Angeles in 1959. Local, national, and international artists’ work was on display from September through December, 2019 in conjunction with other events hosted at the Regis including: a public reception and fashion show by designer Oskar Ly on September 21; artist talk by Alma Lopez and Michela Griffo on September 26th; and a script reading by Haygen-Brice Walker on October 14th.

City of Hope: Resurrection City and the 1968 Poor People’s Campaign 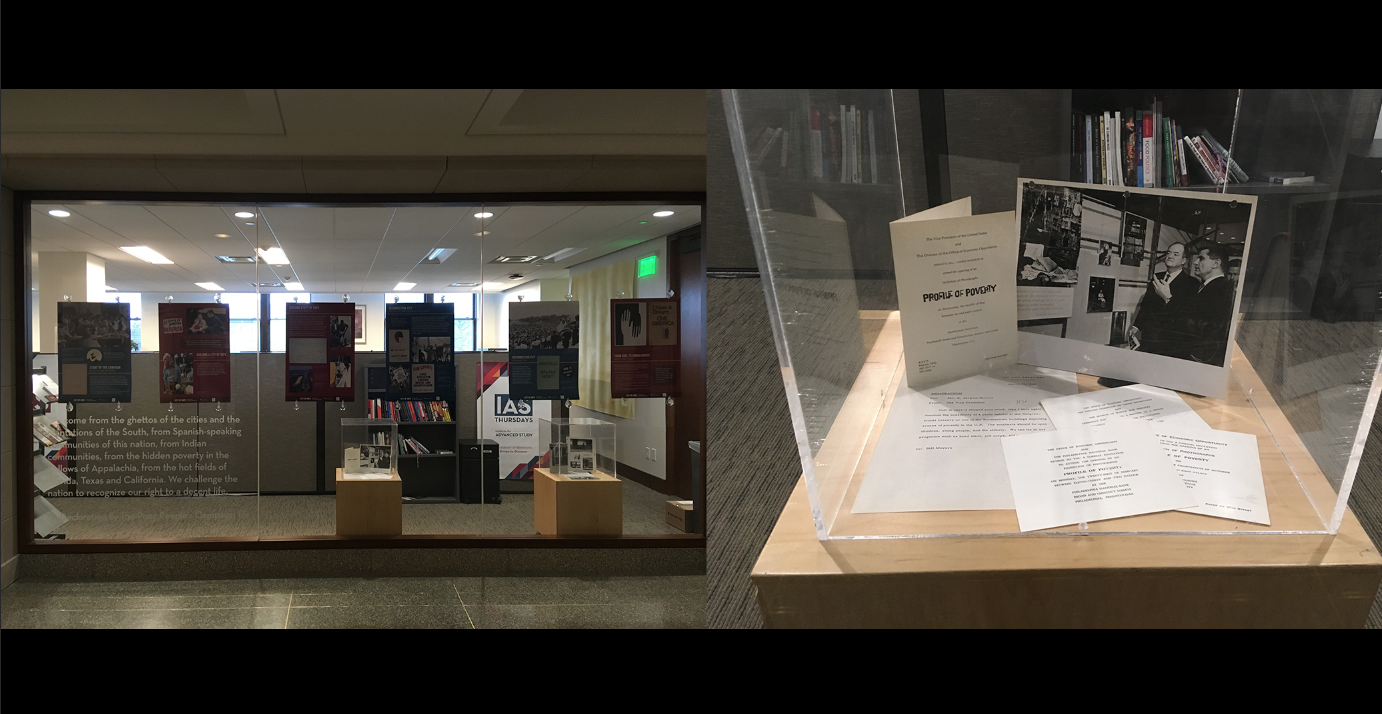 City of Hope: Resurrection City and the 1968 Poor People’s Campaign honors Dr. Martin Luther King Jr.’s daring vision for economic justice and opportunity for every U.S. citizen. The poster exhibition examines the Poor People’s Campaign—a grassroots, multiracial movement that drew thousands of people to Washington, D.C. For 43 days between May and June 1968, demonstrators demanded social reforms while living side-by-side on the National Mall in a tent city known as Resurrection City. City of Hope: Resurrection City and the 1968 Poor People's Campaign is organized by the Smithsonian Institution Traveling Exhibition Service in collaboration with the National Museum of African American History and Culture.

In conjunction with the Smithsonian’s poster exhibition, on display are objects from the Humphrey Archive located at the University of Minnesota. Before the 1968 People’s Campaign and the development of the Resurrection City in Washington D.C., Vice President Hubert Humphrey along with the Office of Economic Opportunity, commissioned the Profile of Poverty photograph exhibit. They sought to bring the conditions of everyday Americans to the forefront of those who did not have the same living experiences

The exhibit was originally on display in the Smithsonian May of 1965 and then reproduced to travel to communities across the United States. By its return to D.C. in January of 1968, the Office reported that it had been seen by 5 Million people after its 30-month long tour. It was placed on display upon its return until April of ’68, a month before the establishment of the Resurrection City.

This exhibit was on display in 290 Northrop through September 2019. To read a brief interview with Elisabeth DeGrenier, co-curator and designer/installer for this exhibit and others, please click here.

The State of our Satirical Union: the Political Cartoons of Herblock

Herbert Block (1909-2001), the political cartoonist better known as "Herblock," became the most honored cartoonist of his time, winning three Pulitzer Prizes, and sharing a fourth for his Watergate cartoons which contributed to the resignation of President Richard Nixon. He was the only living cartoonist whose work was exhibited in the National Gallery of Art, and the only living cartoonist to receive the Presidential Medal of Freedom. He caricatured thirteen U.S. presidents, from Herbert Hoover to George W. Bush, chronicling American history from the 1929 Stock Market crash through summer 2001. He took on causes with courage and conviction, coined the phrase "McCarthyism," forced reform and became the most influential and enduring political cartoonist in American history. These two exhibits – “Presidents” and “Democracy” – showcase Herblock’s work in those two areas of American politics. This exhibit presented by special arrangement with the School of Journalism. 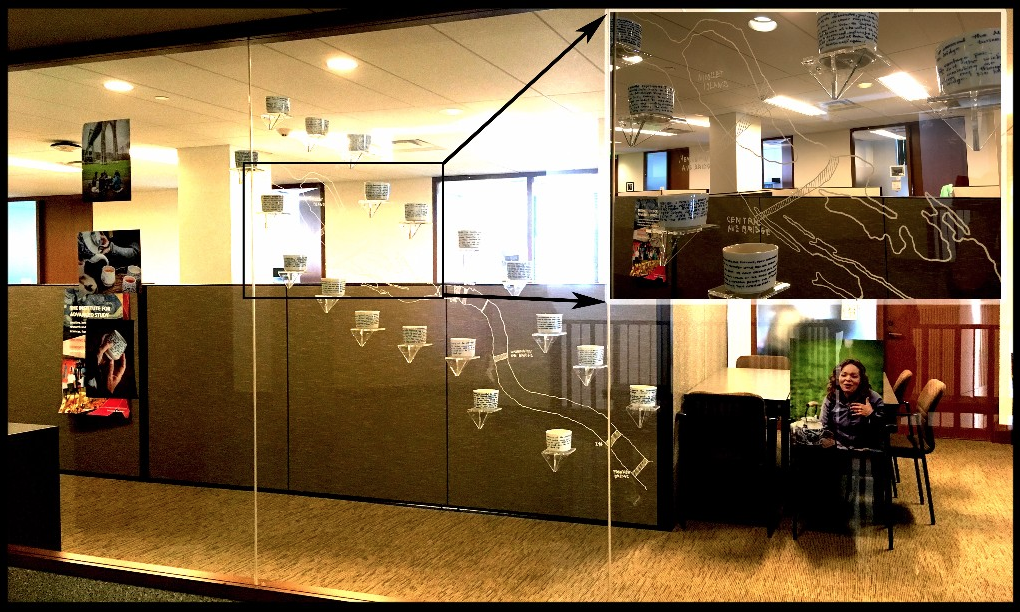 Upstream is a project that seeks to build connections and share water stories between strangers within the Upper Mississippi Watershed. It starts with a tradition that most cultures share in some way: drinking tea. Ripe with metaphor, tea is a symbol of liberation to some, an act of contemplation to others, or even a gesture of cooperation and community. Stories about water are collected and shared through conversations around tea; those conversations are translated onto ceramic cups that provide a tangible telling and an ongoing narrative.

I make art in response to moments I experience in both the natural world and my backyard: a swollen river at dawn, the crack of a freshly opened walnut, the internal vibrations of a beehive in the winter, a hot meal made of fresh vegetables, or a warm brown chicken egg, freshly laid. Even as powerful, is my desire to understand and respond to the needs I see in my community: the gap in access to good food that exists between privilege and poverty, the tension between agriculture and water quality, or a beekeeper’s hive that dies because of a neighbor’s pesticide. My work connects these two worlds - the natural one, and the one created by and tended to by humans. Water, agriculture, food equity, and urban sustainability are all issues I address in my projects.

My art practice is deeply rooted in object-making. My artistic voice is shaped by the language of pots  - the quiet tactility and usefulness of clay informs my work. Equally important to me is the language of engagement. My work bridges the aesthetics of objects and relationships. Through interactive and collaborative projects, I raise awareness about critical issues in the environment and what is happening in my local community. Clay, a medium that finds its way into every home as a sink, a dish or a decorative object, is a ubiquitous and tactile material. I use it as a springboard for engagement and collaboration.

I use narrative as a mechanism to link objects and people. Many of my projects are platforms for other members of my community to share their stories. These collaborations manifest in many ways: traditional recipes narrated by Hmong family elders printed onto blue and white porcelain plates, teenagers’ stories about the Mississippi River printed onto sculptural hanging boats that float through space, or a ceremonial set of cups to commemorate the memory of the coffee ceremony in Ethiopia shared with a community of immigrants. 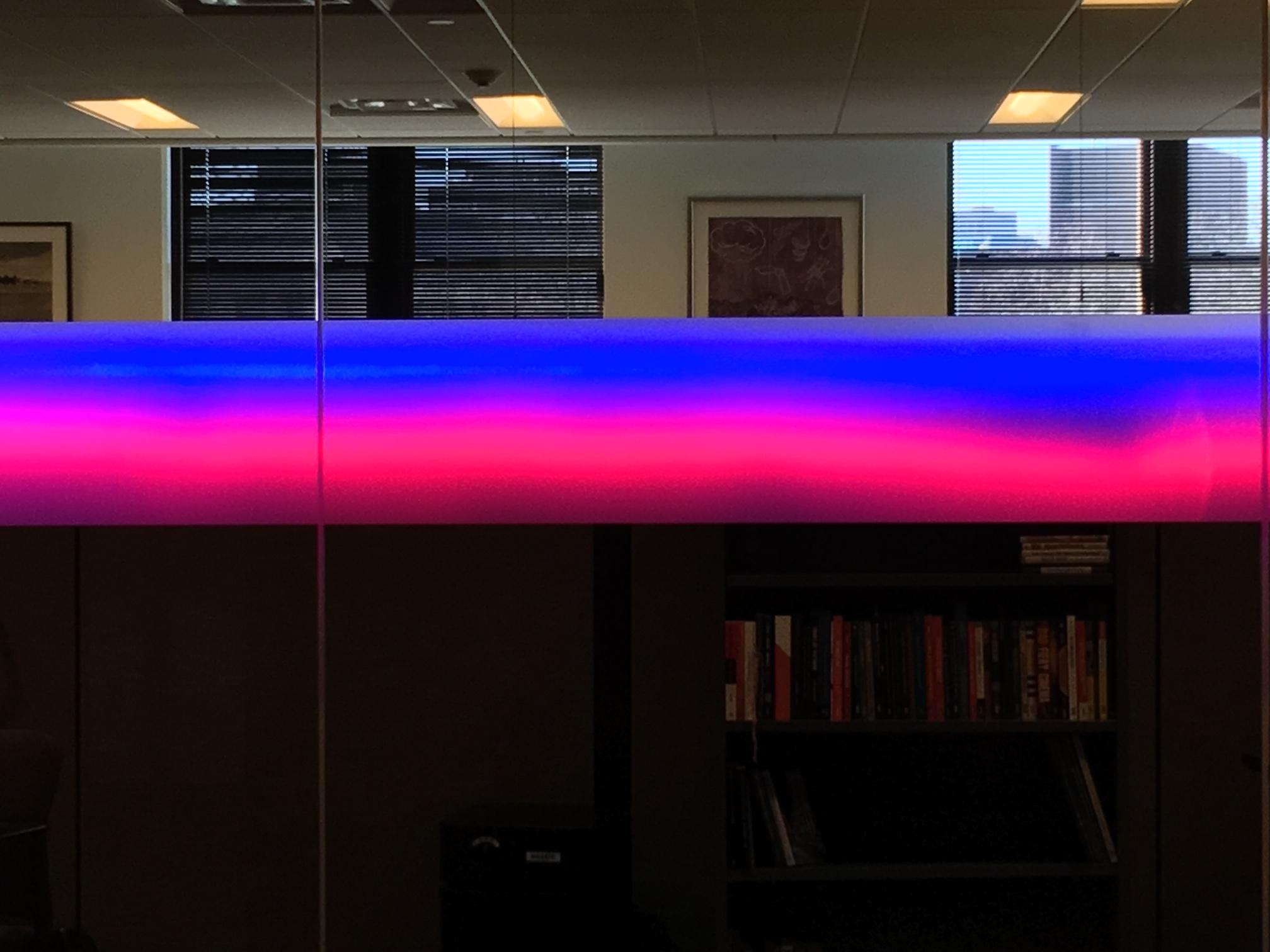 An interactive exhibit by Diane Willow

In casual conversations, when I say that I am an artist, the follow up to the initial question posed as “what do you do” is typically “what kind of art do you make”. After years of trying to succinctly explain my work as a multi-modal artist, I have developed my version of an elevator speech. My response is that I create new work by any medium necessary. This has become a mantra of sorts, a description of my process and an affirmation of an art practice that moves fluidly among disciplines, commonly appropriating and recontextualizing the modalities germane to architecture, science, and technology. While tuning our attention to ephemeral experiences and everyday places, I explore the subtle ways that we express empathy with one another and with non-human life forms, with sensing objects, and with responsive environments. My public installations, interactive environments and evocative objects involve media as eclectic as bioluminescent plankton, tune-able atmospheres, and tactile sound. Focused on art as experience, my work invites you to be the choreographer of your experience of art.