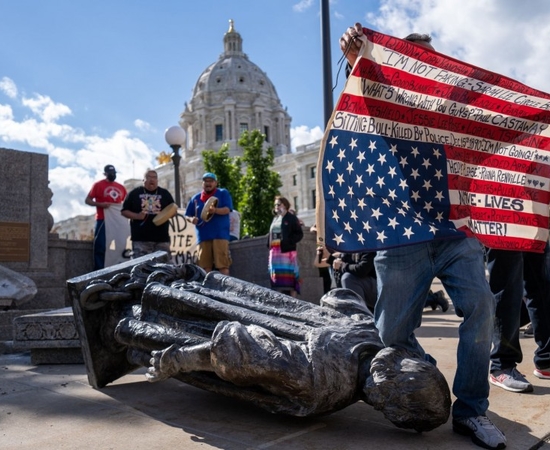 Please note: This event has been cancelled. We apologize for the inconvenience.

This talk situates the police killing of George Floyd and the toppling of statues—including those of Columbus—within a historical context of policing and memorialization. Professor Eudell makes a convincing argument for how both issues address the question of recognition. The continued loss of Black lives at the hands of police calls into question who is really recognized by the law as a full citizen—in effect, as fully human. Statues and symbolic representations suggest who should be recognized, honored, and revered and, by implication (whether by absence or by negative representation) who should not. Unsurprisingly, the origin story our society has chosen to center itself around bears a direct relation to the iconography it celebrates, as well as the structuring of its systemic hierarchies. What has become clear, however, is this: these narratives are no longer sustainable, and the rejection of the ruling systems voiced by many in the wake of Floyd’s killing compels a rethinking of memorials as much as the social and economic organization of society.

Presented by the Institute for Advanced Study and Memory, Movement, Montage, an IAS Research and Creative Collaborative.

Demetrius L. Eudell currently serves as Dean of Social Sciences and Professor of History at Wesleyan University, where he specializes in nineteeth-century U.S. history, intellectual history, and the history of Blacks in the Americas. He received his B.A. in French from Dartmouth College and his PhD in U.S. history from Stanford University. In addition to a number of essays and articles on Black intellectual and cultural history, he is also the author of The Political Languages of Emancipation in the British Caribbean and the U.S. South; co-editor (with Carolyn Allen) of Sylvia Wynter: A Transculturalist Rethinking Modernity, (a special issue of The Journal of West Indian Literature); and co-curator/co-editor (with Dominik Hünniger) of Lichtenbergs Menschenbilder: Charaktere und Stereotype in der Göttinger Aufklärung. His current research projects include a critical edition of the early works Sylvia Wynter, a collection of essays on race and politics in the Americas, and an examination of ideas of history, nature, and human differences in the eighteenth-century German Enlightenment (Aufklärung).