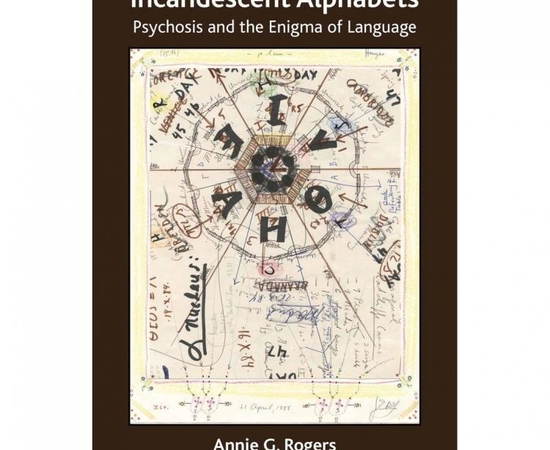 Language changes in psychosis. Words become the floating signifiers of a mad Other who takes up a place in speech. Speech elements connect to nothing, have no meaning whatsoever, and disrupt the meaning that was unfolding. These elements, whether heard or spoken, are foreign to the speaker, and create a profound sense of disorder with respect to speaking. She cannot find her place in language. He questions if his thoughts are actually his, and concludes they are not. How is it possible then to orientate oneself in language once language becomes a puzzling body of signs, bewildering signs without a code or key? In response to the experience of language derailed, artists in psychosis make clocks, calendars, numbers, music, and scripts, the infinite unfolding of codes.  The images of these artists attest to a work of repair through what I call “incandescent alphabets,” a new orientation in time, space and language.

Professor Annie Rogers has conducted studies on a range of topics including girls’ psychological development and trajectories of change in child analysis, as well as studies of language and visual art in psychosis. Co-Director of Hampshire’s Psychoanalytic Studies Program, she is a Psychoanalyst of the Lacanian School of San Francisco and Associate Member of the Association for Psychoanalysis & Psychotherapy in Ireland. She is also a Member of Zea Mays Printmaking. Professor Rogers is a recipient of a Fulbright Fellowship at Trinity College, Dublin, Ireland; a Radcliffe Fellowship at Harvard University; a Whiting Fellowship at Hampshire College; and an Erikson Scholar at Austen Riggs. She is the author of three books: A Shining Affliction (Penguin Viking, 1995) and The Unsayable (Random House, 2006), and Incandescent Alphabets: Psychosis and the Enigma of Language, Karnac, 2016), in addition to numerous scholarly articles, short fiction, and poetry.

Cosponsored by the Narrative Medicine Research and Creative Collaborative, the Writing Studies program, and the departments of Speech-Language-Hearing Sciences, English, Art, Psychology, and Psychiatry.

IAS Thursdays | Islam and the Fate of Others: The Salvation Question

IAS Thursdays | Why Canoes? A Discussion and Virtual Tour of the New Exhibit